Skip to content
Empire Diaries Desk Mumbai, July 9, 2021: Rights activist Medha Patkar and 40 employees of Madhya Pradesh-based Century Mill were arrested by Mumbai police while they were protesting over the factory owner’s decision to force all its staff to take VRS.

The standoff between protesters and cops, and the subsequent detention of the unarmed crowd took place outside Century’s Mumbai headquarters. For close to four years, Century Mill workers from Khoregaon in Madhya Pradesh have been protesting against various anti-worker policies of the management and have been organising peaceful protests, both before and during the Covid-19 pandemic.

Recently, the textile-and-paper mill, now owned by Kolkata-based Wearit Global Ltd, put up a forced VRS (Voluntary Retirement Scheme) notice for close to 1,000 Century workers. The staff members have refused to accept the forced VRS. Many of them arrived at the company’s headquarters in Mumbai for today’s protest against the VRS notice, calling for its withdrawal. 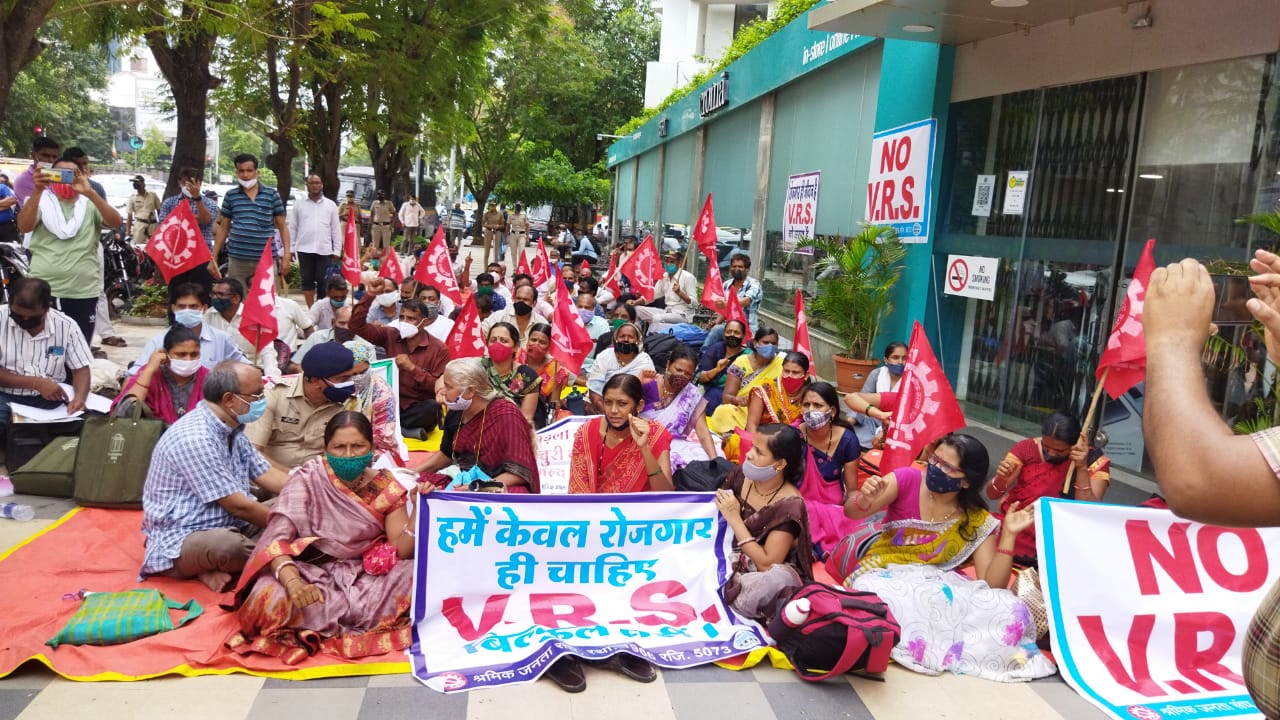 Medha Patkar, too, had joined Century’s protesting workers. She has been deeply associated with the workers throughout the crisis since 2017, supporting them with legal help ever since they first protested against the company’s sell-off and closure of the factory. They were on an indefinite fast from today morning in front of the headquarters of Century Mill at Birla Bhavan in Mumbai. Medha Patkar, too, was fasting alongside them.

While the workers were holding a peaceful sit-in or ‘satyagraha’, Mumbai police showed up at the site and arrested 40 workers along with Medha Patkar. Those arrested also include many women as well as worker rights’ leaders Shyam Badhane, Sanjay Chauhan, Hemant Gosavi and Jagdish Khairalia, secretary of Shramik Janta Sangh. All of them were taken to Dadar police station. “VRS means it is an end for us. We will get Rs 4-5 lakh per head. Can this amount of money feed us for life? We demand that the state and the company management hold a dialogue with us, the workers, withdraw the forced VRS policy, and uphold the right to livelihoods of the workers,” Jagdish Khairalia says.

Century Mill, earlier also known as Century Yarn and Century Denim Mills, was earlier owned by Birla Group’s Century Textiles and Industries Limited.  In 2017, Birla Group sold off Century Mill to Kolkata’s Wearit Global for Rs 2.5 crore. Soon after, the mill was shuttered, in line with Wearit Global’s trend of buying up factories that eventually get closed down. Century Mill has remained closed ever since then.      “It is atrocious. On one hand, the administration cites Covid norms and does not permit any protest. On the other, dozens of workers and many women were literally shoved into one police van a while back, violating all Covid protocols. We appeal to all democratic-minded citizens and groups to stand in solidarity with the struggle of Century’s workers.” said NAPM (National Alliance of People’s Movements), condemning the arrests and demanding their immediate release.

EmpireDiaries.com is an independent digital news platform that critically reports on ‘modern empires’ undermining democracy and people’s rights. It is a free-access media watchdog that critically looks at how ‘empires’ work and shape our lives. View all posts by Empire Diaries